The Importance of Planning Your Story - My Recent Experience

I have been writing and writing and writing at the moment. Once I think I am done writing, I find myself writing some more. I hand write everything first, so the middle finger on my right hand is swollen, and my wrist is aching from the effort. I have been writing a story that has been in my heart and mind for around seven years now. I have somehow never seemed to get it down on paper. It was such a daunting task, and I had no idea how to begin such a huge story.

Thanks to a little bit of advice from Twitter, all of that was able to change. I read a post on mind-mapping, via @curiosityquills, and I decided to give it a go on this story. As a teacher I make my students use mind maps a lot, so I feel a bit dim for not having thought to use them myself. What I came up with was, not a plan for my story, but a springboard from which to start planning. I was able to discover who was linked with who, who hated who etc.

My next step was to work backwards from the end of the story. I knew how the overall story ended for my characters (although that's not necessarily the spot where the story ends for the reader), so I tried to map the story from there. I was able to do this quite well, but then I became stuck. I wanted to make too many jumps and leaps, and my planning method was just too linear to allow that. I gave up for the day and went back to some more research, hoping this would give me some inspiration (it did!).

This story I wish to tell is still a huge undertaking, but thanks to careful planning, character profiles, character mapping, and seven years worth of on-again-off-again research I feel I am finally on the way to releasing this story into the world.

P.S. Does anyone have a cure for callous pain on your writing finger? So far I am just wrapping it up in Band-aids :/
Posted by Ash Oldfield at 4:52 PM No comments:

The New Man In My Life

Things have been very exciting in my life recently. Not only has my children's ebook, 'Scruffy the Christmas Bear' been re-released with illustrations, but I have made a new addition to my family as well. I still haven't got a name for him, and I have only met him the once. I can take him home from the breeder in about a week and a half. I cannot wait! Now that I work from home, and take daily long walks to clear my writer's brain, I know I can give a dog the love and attention it deserves. Isn't he adorable? 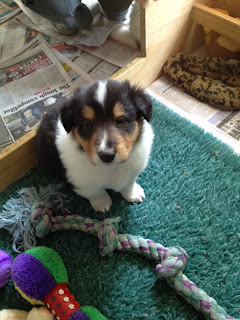 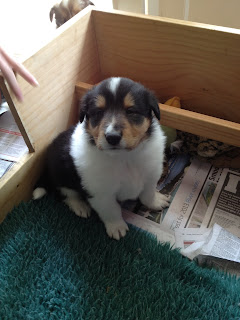 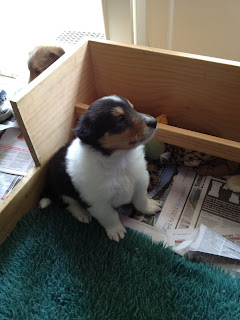 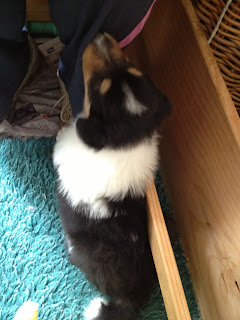 Email ThisBlogThis!Share to TwitterShare to FacebookShare to Pinterest
Labels: Everything

New Look Scruffy Bear, Up and Ready for Christmas!

After months of preparation, and lots and lots of hard work by talented illustrator Benjamin Rawlings, I now have the entire set of illustrations for my children's book, 'Scruffy the Christmas Bear'. As soon as I have the cover art up and ready to go I will release the second, illustrated edition of this book as an ebook on Smashwords. I am really excited by this venture as a lot of my heart and soul (as well as Ben's tireless efforts) has gone into the completion of my dreams of seeing Scruffy in picture form.

I am still in negotiations to have this book printed, but I am hopeful that all the kinks will be ironed out soon and I will have them in my hot little hands shortly.

And so, to the world I am proud to present the first illustration from my children's book, 'Scruffy the Christmas Bear': 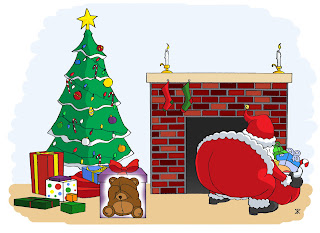 Make sure you stop by soon for more details about further Scruffy adventures. I am madly editing away so that this second book will soon be available as an ebook and print book (also complete with illustrations by the lovely and talented Benjamin Rawlings).

Thanks to everyone for their love and support. I am so lucky to have so many people encourage me along the way.
Posted by Ash Oldfield at 7:28 PM 2 comments:

The Handmaid's Tale, by Margaret Atwood

The Handmaid's Tale by Margaret Atwood
My rating: 5 of 5 stars

This book gave me thrills and chills. Set in the future in America, one U.S. State has a major overhaul of the laws. Women of breeding age who are not biblically married (i.e. living de-facto, on their second marriage, in a homosexual partnership) are forced to go into the homes of older couples to breed. Told from the perspective of one of these women, the storyteller gradually tells you a bit about her past, a bit about the gradual changes that saw her in this situation, and a bit about the present.

This story was creepy in the sense that you can believe that such an event could happen. The laws and changes were made so gradually that no one realised what was happening until it was too late. Atwood tells this story so cleverly that I feel as if I know the main character intimately, event though we never even learn her real name.

I highly recommend this book. It is different, amazingly well written, and will keep you thinking for hours and days after you have finished it.

View all my reviews
Posted by Ash Oldfield at 2:25 PM 2 comments: