Tapping Into the Creative Mind

Today I'm stopping by to share a link for advice on why you might have writer's block and how you can tap into the creative mind. This advice is from my favourite author, Anne Bishop. It's really speaking to me at the moment because I have been paralysed by writer's block for the past month.

So, here it is: http://www.annebishop.com/s.writersblock.html

This post has already helped me figure out where I need to head in able to become unstuck. I am at point B, know what happens at point E, but have absolutely no idea how to join the dots.
Posted by Ash Oldfield at 12:06 PM No comments: Links to this post

Talking to Strangers About Your Novel

I was very fortunate to be able to go to SupaNova this year, Australia's main Pop Culture expo. I had a great time. But I want to relate to you an experience I had that I thought was odd.

I was visiting authors' booths, trying to find my next read. I stopped at one booth and asked the lady what her book was about. She pointed to a laminated card on her table. In tiny print was a description of this lady's novel. It was around 200 words long and with the author standing awkwardly and saying nothing I couldn't concentrate on the card. Thinking to give her another shot at selling her work to me, I asked her a second time what her book was about.
"It's all there on the card," she said abruptly.

I walked away, still with no clear idea about what the book was about. And to be honest, I don't want to know.

Ever since this experience I have been thinking about how I would like to come across to potential readers. I have been rehearsing what I would say about my own book. It really isn't easy. How do I fit a whole body of work into a couple of sentences? I am still working on my Spiel, because I want to get it right. I have also been thinking about images or artwork I might use to help convey my point.

Do any of you have any great tips on how to tell people about your book? I am facing having to have my own booth in a year or so, and I am starting to panic!
Posted by Ash Oldfield at 6:45 PM No comments: Links to this post

Email ThisBlogThis!Share to TwitterShare to FacebookShare to Pinterest
Labels: Everything, Thinking, Writing

What's Your Weapon of Choice?

People are often curious about the instrument a writer uses when creating their master pieces. Do they write on a computer? A typewriter? Felt tip pen? A pencil?

For me, I hand write my entire first draft. This blows the minds of many people, I don't mind telling you.

"WHAT?!? The WHOLE thing? Are you CRAZY?" they will often scream at me, spit flecking from their screwed up mouths.

The pen I use varies. For my previous novel I started with a ball point pen, but quickly switched to a disposable fountain pen for my first draft. I say pen - I mean pens - for there were many. The pens were not very hardy, and I would need a new one every few days. My reasons for choosing the pens, as expensive and flimsy as they may have been, were many. They did not blotch ink all over my page, they were smooth to write with, and they did not hurt the already massive callous on my middle finger. However, as I have said, the pens are expensive and do not last for very long.

For my current project I am writing with a Jetstream 101 UniBall ball point pen. It's kinda like a cross between a gel pen and a biro. It's smooth to write with and doesn't accumulate blobs of ink that invariably end up all over my hands, page and writing surface. They do not last too long, however. Well, maybe I'm just being picky. My current pen has written nearly 10,000 words. It has also nearly run out of ink. But, at a fifth of the price of the fountain pen, I am happy to stick with it for now. It is starting to hurt my hand, but I think that's probably my own fault. I have been rather manic with my writing lately. 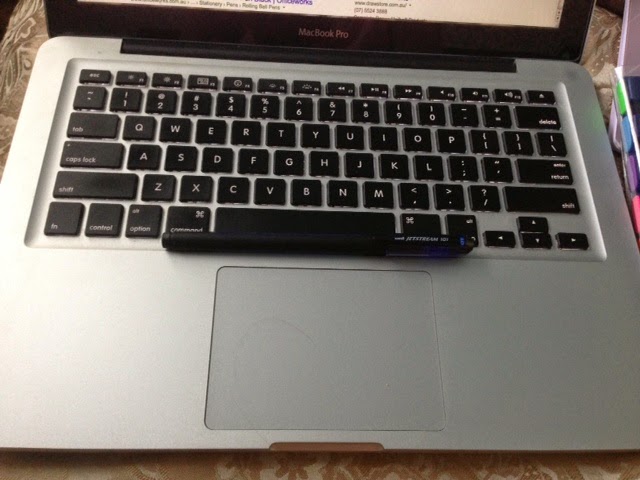 Once I am up to my rewrite it is a completely different story (ha! a pun! I'll pretend I meant it!). I complete my rewrite 100% on my lap top. I use the programme Scrivener, and I find it much easier to use than any other word processor I have ever come across. The problem with working on the computer is that the internet becomes a huge temptation for me, and sometimes I find my productivity is hindered by my weak will and memes of catz.

So, writers. Do tell. How do you write your novels? What is your writerly weapon of choice?


At the end of the day I don't think it matters what you write with, so long as you write. For as long as that has been my mantra I have been productive and happy with my work.
Posted by Ash Oldfield at 5:29 PM 2 comments: Links to this post