S.J. Pratt loves writing young adult science fiction. Her work has appeared in Sponge, The Quick Brown Dog, The Commuting Book, and Antipodean SF. She is also a narrator for the Antipodean SF Radio Show, which she loves.

She runs an aerospace engineering company by day and writes by night (well, early hours of the morning), is an avid feminist and coffee addict, and looks forward to culminating her existence as an omnipotent space whale. She lives in Christchurch, New Zealand with her incredible husband and incredibly needy cat. Her debut novel, The 716, is now available! 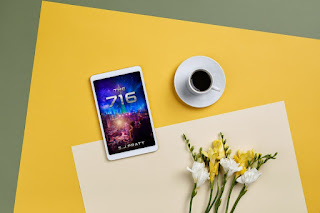 I’ve always been an ardent feminist. One day, I was having a drink with a friend and I was getting pretty upset about sexism. About being interrupted dozens of times a day. About my less qualified male co-worker who was paid more than me for the same job. About the rape case that happened in a spot that is literally on my walk to work. The friend I was talking to was sympathetic, but he didn’t really get it. Not like I did. So, for some reason, I posed a question: What if it was the other way around? What if women were the so-called dominant sex? What if men were expected to do the household chores while holding down a full-time job because nature made them better at it and the universe taught them it is their responsibility? Suddenly, his fire came out. He started getting just as passionate about it as I was. Now, I want to be clear, it’s not that he didn’t agree that sexism was bad and we should have done something about it before this moment, it’s just that this was the point where he really started wanting to be a part of the solution, the point where I could tell he could feel the injustice rather than just understand it and sympathise. So, I wandered home thinking, what if I wrote a novel like that? Where the world favoured women and feminine traits? Where only women could go to university or the glass ceiling prevented men from rising up through the ranks? And then, what if our main character was a young man, trying to be taken seriously as a budding engineer in a world that has judged him for his unimpressive looks and clothing choices before even giving him a chance? And from there, The716 was born.

The 716 has been completely rewritten 5 times, parts of it more than that. It’s a completely different story now. RAY, my adorable robot side character, hadn’t even appeared in my head and Meliora was a tiny town, not a collection of large cities.

One difference that strikes me is my main female character. To begin with, readers found Olivia too egotistical and selfish (which made me reflect even further about how women are “bossy and rude” while men doing the same things seem like “confident leaders”). I had to be very careful how she came across. I wanted her to be inherently privileged and not understand her privilege, but also have it be believable that after she meets Andy (our male protagonist) and goes through the events of The 716, that she would change and embrace feminism and equality for all.

Oh, where to begin! There are so, so many. Here’s just a few:

·         Jane Austen. I love Elizabeth Bennett. I love that she refused a man after he said he loved her against his better judgement and in spite of her family, especially given women were supposed to feel grateful that a man even noticed them back then!

·         I, Robot: I’m not a fan of all of Asimov’s work, but I love this one. A collection of short stories that explores what it means to be human and what it means to be a robot. Also, one of the main scientists is female, which is pretty boss given then time this was written. 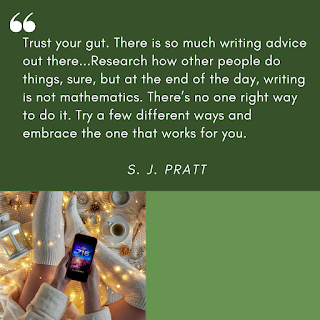 I’m lucky enough to work part time. I get two full days a week to dedicate to writing. I’m an early bird, so on those days I get up nice and early, grab a gigantic cup of coffee and let the words flow.

Let your first draft be for you. Don’t give in to the gremlin in your head telling you this has to be great. It doesn’t. It’s a first draft. If you want a unicorn to wander into a scene and save the day, then do it! Don’t judge. At least, not yet. That’s what the very important editing stage is for!

Trust your gut. There is so much writing advice out there: whether you should plan before you write or just sit down and go, types of character and story arcs, how many side characters are too many etc. Research how other people do things, sure, but at the end of the day, writing is not mathematics. There’s no one right way to do it. Try a few different ways and embrace the one that works for you. And when you read something in your manuscript and you feel it is off, it’s probably off. Look into it.

It’s funny you ask that because I just put my book up for pre-order so in a way it is “done”. And then I took out the rubbish lol! On a serious note, I have a glass of wine and read something fun or watch a movie and then on the weekend I go out for a really nice dinner with my husband/family/friends. I think it’s important to take a moment to enjoy that success.

It’s cliché, but read. Read in your genre. Then read outside your genre. Take note of how successful authors have done certain things, especially within your genre. Tropes, character development, story arc, twists and reveals, that kind of thing. The more I read, the better my writing is, and the cooler my ideas are.

Getting The 716 ready for release day! Bring on International Women’s Day (March 8th)!!

I’m currently reading The Dying Light by Lily Rooke. It’s intense, the characters are layered and conflicted, and it’s an epic read so far. 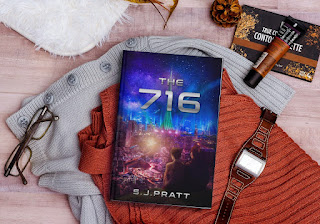 Olivia is destined to be the future leader of Meliora. She’s smart, rich, and innovative, and she has a pink Identifeye light.

Andy is destined to be a waiter and househusband. His blue Identifeye light prevents him from pursuing his dream of becoming an engineer. After all, who ever heard of a male engineer?

But when Andy’s life becomes entangled with Olivia’s and he gets the chance to prove himself on the female stage, everything starts to change.

In a society where men are second-class citizens and only binary gender norms are acceptable, Andy and Olivia must confront their own beliefs and decide what kind of world they want to live in.

Will they do what is expected or what is right? And will the wrong choice spell disaster?

The 716 is a vivid feminist coming-of-age story filled with resistance, romance, and the courage of everyday heroes. Fans of The Lunar Chronicles and Noughts and Crosses will enjoy this original and thought-provoking Sci-Fi adventure.
Find out more about SJ Pratt by following the social media links below: