Havelah McLat lives on a small farm in rural Ohio with her family. As a kid, she spent hours drawing and then crafting short stories to go along with her illustrations. As she got older, her passion grew to write stories about the world, faith, and topics that matter the most to her. Havelah has written several short fictions that have been featured in different anthologies. When she’s not writing, she reads books, draws, which she shares on my website, helps with activity events in her local church and community, and spend time with her family. During her free time she watches YouTube videos on different writers and authors on their writing journey and self-publishing industry.

A Forever Summer, and I got the inspiration out of a Victoria magazine from a friend. There was an image of two kids holding a boat and surrounded by water. And a bunch of old letters. That’s where the story begins. Haha, the draft has changed quite a bit. The story was originally set in the 80s but then things didn’t work out and I decided to rewrite from scratch to make it contemporary fiction.

Richard Evans, Beverly Lewis and several other authors. Even though both authors write fiction, they each write different types of genres. Richard would write sentimental stories and Beverly would write Christian fiction, but in a way, both have influenced me and how I write stories with valuable morals and faith.

Hmm, I usually like to write in the morning and sometimes in the evening. All depends on my mood and when the inspiration hits me.

Write at your own pace. Trust your storyteller (or main characters) and let them tell you the story. 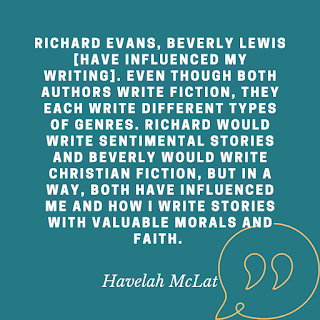 Write a description only if it is important to the plot.

Eat ice cream or sometimes buy something to reward myself for accomplishing the draft.

Read books, watch Youtube videos about writing, and learn and grow in your skills.

Right now I am working on a contemporary, clean, winter romance set in the same world as A ForeverSummer, but they aren't a part of a series. They are all stand alone.

I would read a book that interested me. But I can say I have a long list of books on my TBR I would like to read before the year ends.

To find out more about Havelah McLat, check out the social media links below. Keep scrolling for an excerpt from A Forever Summer. 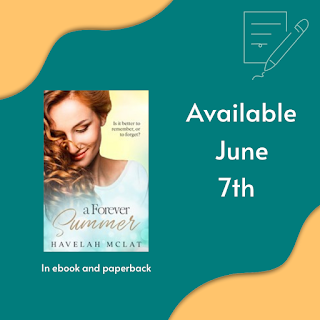 Havelah McLat has generously provided us with an excerpt from Chapter One of A Forever Summer.

Katherine grinned wryly. It could be worse—I could have actually gotten hit. She breathed calmly. There is nothing that needs to be fretted over.

The sound of approaching footsteps caught her attention. She shifted her attention from Maude to the person who returned with a bottle of water in his hand. He was dressed professionally in a dark suit and tie. He was older and his face appeared very serious, but when he saw she had arrived, he greeted her with a friendly smile.

“I apologize for being late,” said Katherine.

He laughed, waving his hand. “It’s alright.” Then he gestured for them to take a seat at the desk.

“Mr. Dan—” Katherine paused and looked down at the name on the plate. “William Danforth, I was told we have a matter to discuss.”

“We do.” He sipped a little water and set the bottle aside. “Let me get the file.” He pushed his chair back and swung his arm to a large cabinet. “Your father told me about you both,” he said as he rummaged through his files.

Katherine glanced over at Maude, who was sitting next to her. “He did?”

“He said you are an artist,” said the lawyer turned his head sideways to look at Katherine, “working for a Boston Lifestyle magazine company, and Maude is a freshman in college.”

Katherine chuckled in amazement, wondering how much personal information her father shared with him.

“He told me how proud he is of you two.”

Katherine sadly smiled as she thought of him, especially as she remembered her and Maude watching him drift away into that deep sleep, and breathing his last breath. She wiped tears from her eyes and swallowed the lump in her throat.

“Should we get this settled?” said Mr. Danforth.

The lawyer pulled out the document and slid back to his desk. “You already know your father has drawn a will…”

Katherine turned to Maude, and they exchanged knowing glances. Shortly before he died, he told his daughters they would inherit his home and everything that once belonged to him. After their mother’s death in a car accident years ago, their father’s will was the only reminder of their parents’ plans for the family.

“Is there something else we should know?” Katherine asked him, noticing a grave expression on Mr. Danforth’s face.

“Before your father passed away, he included something else in his will.”

“What do you mean?” Maude asked him.

What could he possibly add? Katherine pondered the same thought. She squinted in confusion, and the lawyer slid the file in front of them. Katherine opened it and drew out the sheet of paper. She studied it closely.

“What did he add?” she asked, pausing from reading.

“I can show you,” he said, holding out his hand. Katherine gave the document to him, and he pointed to one section toward the end of the will.

She and Maude drew their heads closer and squinted at the paragraph. Katherine raised her brows when she read it. “Our father left us a house in Westchester Bay, Massachusetts?”
If you enjoyed this interview, please consider Buying Me A Coffee to keep these interviews going :)
Posted by Ash Oldfield at 8:30 AM