As long as she can remember Brook Peterson has been reading mysteries. By the time she was ten, she was writing her own and turning them into little stapled paperbacks to share with her family. She’s thrilled to be writing and publishing real books to share with all of you mystery lovers out there. Her stories are sure to include long-held secrets, an antique or two, and a bit of romance.

My latest book is A Collection of Secrets, which was released on January 14, 2022. This is Book 2 in my Jericho Falls Cozy Mystery Series.

I’m very excited about this story. It picks up where Book 1 left off. Similar to A History ofMurder, there are aspects of the past that continue to trouble our sleuth, Chloe Martin. But that’s not the only thing complicating her life; she also hits a snag in her burgeoning relationship with police chief, Lance Garner. Without giving too much away, I will say that readers of book one who wanted more information about Christy’s mysterious diary will be pleased. ;-)

My favorite part of writing this story was incorporating the RV park scenes. In the past, my husband’s job required extensive travel and staying in RV parks was a way of life for us. It was fun for me to bring this part of our real life into the world of Jericho Falls.

Emotional scenes are tough for me because I truly feel like my characters are real people—I hate to see them in pain. Appropriate music (no words, please) helps me get in the right frame of mind. And I also like to “watch” the scene like a movie in my mind before drafting.

The first mystery series I fell in love with as a kid was Alfred Hitchock and The Three Investigators. The series was written by a variety of authors. These stories prompted me to want to become a mystery author myself when I was about ten years old.

Later, I had a similar experience with Sue Grafton’s Alphabet Series. In my opinion, it is the best P.I. series available to date. Go check it out if you haven’t already. Grafton is a master.

Q4: What advice would you give to a writer working on their first book?

Finish it. It’s typical of new authors (myself included) to start and stop many projects. But, you’ll never learn the craft of story structure unless you write from beginning to end. Once you have the first draft done, the real work begins of shaping it into something worth sharing with others. 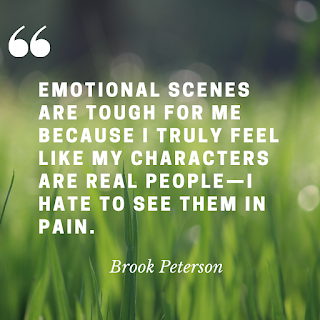 Q5: What was one of the most surprising things you learned in creating your books?

That other people are fascinated by the same weird, sometimes macabre things that I am; old time towns, antiques, creepy places, and family lore.

Q6: What was an early experience where you learned that language had power?

At about twelve, I wrote a little memoir-type story about my beloved grandmother, who had recently passed away. It became a family favorite and talked about for years. I was proud to have been able to capture the love and appreciation I had for her in a few paragraphs and thrilled that it influenced others.

Q7: What was the first book that made you cry?

This is such a funny question. My mom remembers that I cried at the end of almost every book I read and every movie I watched because “it was so good!” I just love well told stories.

Q8: What are you working on now?

My upcoming project will be another middle grade mystery novel for my series published by Level Best Books. It features middle school sleuth, Jessi Johnstone and her twerpy but intellectual side-kick, Ian. Book 1 in the series, The Cameo’s Secret, will be released in the Spring of 2023.

Q9: What are you currently reading?

I’m currently listening to the audio production of Troubled Blood by Robert Galbraith. This is a superb detective series that I highly recommend, but are we surprised since Galbraith is the pen name of J.K. Rowling? By the way, Robert Glenister is the narrator for the series and is AMAZING. 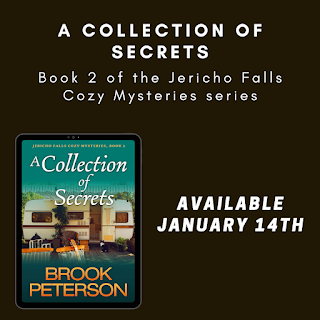 A Collection of Secrets, book 2 of the Jericho Falls Cozy Mysteries series is NOW AVAILABLE!

Find out more about Brook Peterson by following the links below:

And don't forget to sign up to her newsletter here

Keep reading for the prologue of A History of Murder, Jericho Falls Cozy Mysteries Book 1

It all started with a corn dog. It was the reason my stomach began to rumble at mile marker 247 and cramp by number 258. It was the reason I kept speeding up little by little until my speedometer dial flirted with 80. How long had that deep-fried excuse for lunch been sitting underneath the red lamp? And was there a bit of vegetation on this godforsaken desert highway large enough to hide behind? Nope. Not a chance.

So it really was because of that darned gas-station corndog that I started to see the red and blue flashing lights appear and grow in my rearview mirror.

“That cop probably isn’t coming for me,” I soothed myself. “Don’t get nervous—it’ll only make things worse.” I inhaled and exhaled slowly, practicing the breathing technique I knew to quiet my anxiety. I let off the accelerator and said a little prayer for mercy. Please, God, if you let this police car drive past me, I shalt not eat junk food just to pass the time of a boring drive ever again.

The cruiser was right behind me now, sirens and lights blazing. The cop wasn’t going to pass me. My pulse raced as I eased my old Toyota pickup onto the gravelly shoulder and prayed this would not take long. I rolled down my window and waited for the inevitable.

Glancing at my reflection in the rearview mirror, I hoped I had some trace of a hairdo and makeup left. Cops let cute girls off the hook, right? Sadly, the warm desert climate had deflated my hair and melted what little makeup I started with that morning. I refocused and watched the policeman take his own sweet time to open his car door and slowly meander up to mine. Come on, buddy, I’m getting desperate here!

As soon as he was within earshot, I blurted, “The answers are ‘yes’ and ‘the corndog.’”

“Excuse me?” the officer said, leaning down and doing the stereotypical two-second car interior scan.

“You were going to ask me if I knew I was speeding—yes—and what the hurry was all about—and it’s the corndog.”

“The corndog,” he repeated flatly.

“From the Conoco station about fifty miles back.” I pointed in the direction I had come from and made a face meant to say, ‘yikes.’

“Miss, I’m beginning to wonder about your sobriety,” the officer said, “and you’re sweating pretty heavily.”

“I’m not drunk, sir,” I told him, “but I need a ladies’ room in the worst way. I’d settle for a porta-potty, or steep embankment out of traffic’s view, if you know of one.”

A longish moment of silence followed my confession. It gave me just enough time to notice how incredibly cute this man, who was presently deciding my fate, truly was. His arms were folded across his chest, displaying an attractive amount of blond hair on his forearms. The navy blue of his uniform set off his tan skin, and I suspected it would enhance blue eyes nicely as well. That is if those eyes hidden behind his aviator shades proved to be blue.

At that moment, a stomach cramp averted my attention. I clenched my teeth and squeezed my eyes shut. I felt a bead of sweat trickle down my temple.

“Follow me,” he said. With that, he jogged back to his cruiser and gave what I like to think is history’s first-ever police escort to the bathroom.

You can purchase A History of Murder here.