I am New Jersey, U.S., based writer and high school English teacher. I’m currently writing the Drowned Realm Series. The first book, Rise of the Red Harbinger, was published in 2017 and the second, Ghosts of Ashur, was released on May 15th, 2022. Aside from that, I’m a husband to a wonderful wife and father to two beautiful/demonic girls.

The Ghosts of Ashur is my latest book, which is the second instalment of my Drowned Realm Series. The first book in the series is Rise of the RedHarbinger. It’s a fantasy series inspired by my own experiences, as well as by other works and fantasy series, such as Lord of the Rings and The Wheel of Time.

I was originally inspired by Robert Jordan’s Wheel of Time, and then similarly by J. R. R. Tolkein’s Lord of the Rings and George R. R. Martin’s A Song of Ice and Fire series. I’ve also found some great inspiration in Brandon Sanderson and Pierce Brown.

I’m pretty simple when it comes to that. I need my laptop, a notebook and pencil, my book’s world map for reference, and my phone and headphones. Usually as long as I have music, I can stay focused.

Planning is definitely one of them. I understand that there are “planners” and “pantsers”, but no matter which one you are, you still have to have some things worked out in advance. Good Pantsers still know their characters and worlds well enough that they can trust those things to take the story where it goes. Stories and writing are so much more rich when a writer has taken the time to build a world as in-depth as possible.

Just write. Honestly, the only regret I have about writing is that I didn’t follow this advice. It took me forever to start the actual writing process and I wish I had done so sooner. I think I was afraid to start, and the truth of it is that you can’t be a good or bad writer if you never start writing.

It’s probably obvious, but fantasy is my favourite. Fantasy is what unlocked my imagination and inspired me to write my own series, and I love that the only limits of the genre are the author’s imagination. It’s nice to be able to read and not worry about the story being realistic.

Characters. Interesting characters with dimension can make any story interesting. If you flesh out a character enough, they tell the story for you. One of my favourite parts of my own writing process is that there have been numerous times in which my characters have dictated the course of the story. Literally, in the moment, I’ve realised that a character wouldn’t do something the way I originally planned, and it makes the story so much better for it.

I’ve just sent my editor and publisher the final draft of my second book, The Ghosts of Ashur, and once they look it over for the last time, it should be all set for publication. We’re targeting a May 15th release for it.

I just started The Satanic Verses by Salman Rushdie. I picked it up years ago and just never got around to it. Now that I have some time to read, hopefully I can finish it.

Keep reading for an exerpt from Chapter 2 of TheGhosts of Ashur, Book 2 of The DrownedRealm Series 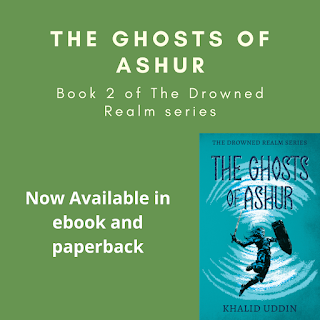 One of the Jinn struck Baltaszar from behind, knocking him face-first into the hard ground. His eyes were tearing from what was sure to be a broken nose. Before he could muster the strength to push himself off the ground, one of the Jinn pulled him up to his feet. He opened himself to his manifestation and summoned a flame to each hand. He had no idea how the flames would help him, but it was the only thing he could think to do. Baltaszar swivelled his neck as his attackers drew closer. He threw his flames at two of them, only to see the fires disappear against their skin. He summoned a ring of fire around himself, thanking Lincan for making him impervious to his own fire. The Jinn drew closer, stepping right through the circle of flames.

On two feet, they stood more than twice his size. On four, they were slightly less intimidating, but still the size of horses. Their thick pale skin was off-putting, especially with the earthy colours always shifting. Jinn generally could only be seen if they wanted to be. Baltaszar wished, at this moment, that he couldn’t see them. It would have been less terrifying to be attacked by invisible creatures than to be surrounded by the grotesqueness of the Jinn, knowing they wanted to hurt him, and perhaps kill him.

Another Jinn advanced towards him and punched at his chest. Baltaszar attempted to shield himself with his right arm, but the blow shattered the bones in his forearm, which then slammed into his ribs, likely cracking some in the process. Baltaszar doubled over and then fell to his knees. He sucked at the air and grasped his broken arm. He labored to breathe and bent forward to put his forehead to the ground. If the Jinn planned to kill him, he could not do much to stop them. A warm foot pushed him flatly to the ground, and Baltaszar screamed at the pressure on his nose, arm, and ribs.
Find out more about Khalid Uddin by following the social media links below