Reigning from the dreamy plains where tornadoes and imagination roam, Amber Lambda has always been filled with a creative streak, and you’ll never catch her without a notebook. (A pen, however, is a different story.

Though she adores the endless possibilities of a blank page, Amber's author heart belongs to YA love stories, often including low fantasy and soft sci-fi elements. Her mission is to create clean stories laced with themes and ideas that teens (and adults) will love and relate to.

You can follow Amber's life, writing, and caffeine adventures at her social links, and her debut novel Halos is available on Amazon.

Genre: YA romance and fantasy

Q1: What is the name of your latest book and what inspired it?
My debut novel Halos is about almost-sixteen-year-old Faye, who is an avid dreamer with recurring visions of a certain boy and a world in the sky—and it actually was first inspired by a dream I had of three main characters of the story! Of course, the story itself changed completely, but the dynamic between the characters stayed intact, which was pretty fun. As the story grew, it also became inspired by themes I felt like most young adults can relate to, when things aren’t quite going as expected, and you have to make a choice to keep going and believing anyway, or let the world drain your dreams. Q2: What’s your favourite and least favourite part of publishing?
My favorite part has been hearing from readers. It’s been so cool to know that people relate to Faye’s daydreamy personality, to hear what they took from the themes woven in, and that Icarus is growing a fanclub haha! On the flip side, my least favorite thing was formatting. I wished I’d had the skill to make the pages prettier, and someday I’d like to expand that skill and release a special edition with maps and fancy things. Someday.

Q3: What authors, or books have influenced you?
Though I haven’t read her books in a long time, I remember Cassandra Clare being really inspiring to kicking off my writing journey. Her Mortal Instruments series was the first one that I’d read with multiple POVs and where I felt like I got to know individual characters on a deeper level. Likewise, I love a lot of manga for the same reason, especially series like Fruits Basket, where the characters’ arcs and the themes of the books are a huge focus. I definitely enjoy writing character-driven stories where the plot wouldn’t exist without them and their growth.

Q4: What is your schedule like when you’re writing a book?
As a homeschool mom and a freelance editor, my schedule is pretty tight most days! My writing schedule can be quite erratic and is often squeezed into small bits of time throughout the day, or late at night when I should be sleeping.

Even if you’re not a plotter, at least knowing what your character wants (even if it’s obviously not what they need) can make a huge difference in the story. It gives them a focus to work toward and can help give you an idea of what they might do to work toward it when you get stuck. 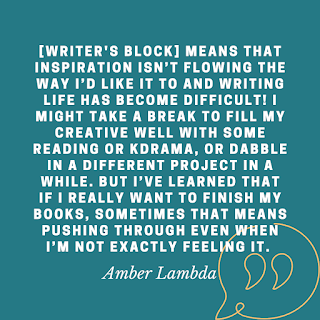 Q6: What do the words “writer’s block” mean to you?
It means that inspiration isn’t flowing the way I’d like it to and writing life has become difficult! I might take a break to fill my creative well with some reading or kdrama, or dabble in a different project in a while. But I’ve learned that if I really want to finish my books, sometimes that means pushing through even when I’m not exactly feeling it.

Q7: What part of the book was the most fun to write?

My favorite parts of Halos are the building hints of romance and scenes where the characters grow closer. They made me feel super sappy and embarrassed at first because I hadn’t ever imagined being a romance writer when I first started out my writing journey! It was a learning experience, but I learned I really loved creating the romantic plot, and it started my journey into the realm of clean romance!

Q8: How would you describe your book’s ideal reader?
I write for other hopeless romantic young adult readers who love sweet couples to cheer for, a dash of whimsical adventures and dreams to chase—but who also want these elements rooted in deep themes that speak to real life, leaving them with something to think about even at ‘the end.’

Q9: What are you working on now?
Right now I’m about a third through this draft of another YA fantasy romance called Comets Fade with Summer. It follows Halley, who is forced to start her social life over after a cross-country move, and is about making true connections, battling peer pressure—and maybe about not falling in love with your imaginary friend. I’ve decided I’m actually going to jump into the querying process with it this summer! I planned on trying to be a hybrid author, but I hadn’t really planned on querying just yet, so I’m a little terrified and excited all at once!

Q10: What are you currently reading?
I’m currently reading though a stack of some fun YA books I borrowed from the library. Including Once Upon a K-prom, which makes my inner kdrama fangirl super happy! I also love to arc read for other indie authors and am reading Belonging With Her Best Friend by Kristin Canary, a cute romcom!

Halos by Amber Lambda is available as ebook and paperback. Keep reading for a sneak peek.

The boy at the door quirked his brow. Not Andrew. Unruly dark hair, unreadable grey eyes, freckles speckled heavily across his face.

Faye’s heart stopped rigid, and her legs wobbled beneath her. Her jaw fell open, quivering. It was—

“It’s you,” the boy’s level voice stated the words her own mouth wasn’t forming.

Every bit as handsome as she’d dreamed and taller than imagined, he towered close to a foot over her. She moved her gaze down his iridescent silver jacket to his macho combat boots and back to the cool swoosh of bangs across his forehead. An awareness of her puffy, red eyes and the faded denim dress she’d thrown on flushed over her.

She searched his attractive features again for good measure, not a crease of joking in his tight lips.

“Wh-what?” Lightheadedness flooded her brain, and she braced against the doorway.

Somewhere, way deep down, she should be skeptical, confused, maybe even afraid. Instead, overwhelming wonder shivered through her with so many questions.

One blurted out as most important: “Why?”

Needed? Faye Wallace, the professional daydreamer? She blinked, unable to imagine. “For what?” He put his hands in his pockets and glanced over his shoulder. “I can’t say here. They’ll explain when you arrive.”
Find out more about Amber Lambda by following the social media links below:
Facebook

Website
Enjoy this interview? Please consider Buying Me a Coffee to keep them coming :)
Posted by Ash Oldfield at 8:30 AM