Lydia MacClaren has been writing stories since her earliest memories. She lives in rural Pennsylvania with her loving husband and sweet daughter. When she is not chasing around a never-sleeping baby, she writes. When she is not writing, she dreams about her fictional worlds.

Seven Lives Saved is the name of my book set to be published July 14th. It was inspired by the first line, “Kathka was dead.” I was captivated by the line, and though the story changed along the road that line remained the same. 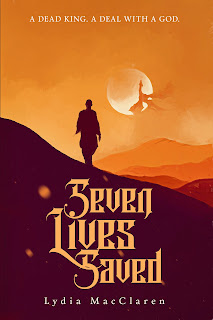 The first books to get me into fiction were dragon books, a creature included in my debut novel. A huge draw into the fantasy world was the Dragon Keeper Chronicles by Donita K. Paul. J.R.R. Tolkien as well as Brandon Sanderson have been impactful in my writing journey as well.

Q4: Which of the characters do you relate to the most and why?

I’m not sure I really “relate” to any of them, they are so drastically different to me! If I had to choose, I would say Nana. She is so optimistic and positive, I aspire to be more like her.

Write the first draft. I think writers often get stuck agonizing over getting everything right the first time, but really the actual writing is such a small part of the book writing process. Editing is where it’s at, and don’t be afraid to take your time there! 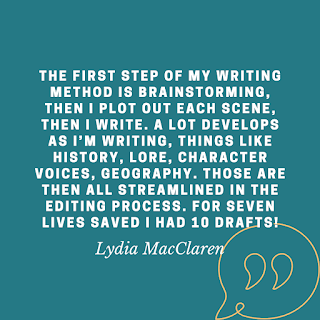 I performed sporadic research. As it’s in a fantasy world I could make up a lot of the stuff myself, but since I don’t live in an arid region a lot of random information had to be looked up as I wrote.

The transitionary scenes are always the hardest for me to write. Action is easy, but the lulls? Hard.

Absolutely a plotter, but a pantser in world building. The first step of my writing method is brainstorming, then I plot out each scene, then I write. A lot develops as I’m writing, things like history, lore, character voices, geography. Those are then all streamlined in the editing process. For Seven Lives Saved I had 10 drafts!

I am working on another stand-alone novel called, The Bound. I hope to publish the book in Winter 2023. Seven Lives Saved and The Bound are complete opposites! One is set in the desert, the other in the snow. One is fast-paced, the other slow. One has an antagonistic main character, the other is compassionate. One has a positive end, the other is a tragedy. It makes it fun to work on them both!

Too many books. On audiobook, Caraval by Stephanie Garber. Ebook, ARC of Jimmy Chartron and the Lost Keystone by J. T. Michaels. And last, I’m rereading The Song of the Sparrow by Lisa Ann Sandell.

Seven Lives Saved, by Lydia MacClaren is released on July the 14th. Check out the excerpt below from Chapter 1:

The silver edge had sliced his throat, and he had lain upon the desert as his blood soaked into the parched earth. Hatred boiled away what life was left in his veins. There he died, abandoned and defeated.

Kathka’s murderer knelt beside his body and pressed two fingers to his jugular. He found no life. As the old man withdrew his hand he spoke, the only words that Kathka would hear him say. Words that cursed, words that damned.

Words that stuck like thorns into Kathka’s soul. They bound him to his killer. He strained to speak, to move, to act, but he had no corporeal body that had been buried by his murderer in the dust of the desert. He was a soul and nothing more, an awareness that saw the world of the living but unable to interact with it.

A soul cursed to remain tethered to his murderer, the Wise Man, the last of the gods. The only one who had not forsaken the land.

The damning words were the last that Kathka would hear for a very long time. But time was a difficult thing to comprehend. His senses had become warped, all he knew was his murderer.

The god kept to his caves, large carved-out rooms filled with ancient tomes and sheaves of paper, quills and inkwells, little trinkets of rock and feathers, and glass jars filled with dried plants. There were no visitors, there was nothing but the god.

It was a strange limbo that Kathka inhabited. Every passing moment could be a day or a thousand years. In that uncertain expanse of time the old man shuffled back and forth between his books, tugging Kathka’s soul along with every step.

Unable to speak, he still possessed the ability to think. In his convoluted thoughts, he replayed every moment that led to his death, and his hatred for his murderer grew. He had come with his army to conquer, but he had met the Wise Man alone. Alone before the god. Then his blood was spilled. That moment looped in his mind and he tried to discern how he could have avoided that fate.

His death seemed inevitable. His murderer was a god.

Still, he dwelt on the memories. The blade slicing again, and again. It was rage that had driven him to the wilderness to kill the old man, and that rage continued to grow.

The old man straightened at his desk, joints protesting with weary age. Then, he turned and caught Kathka in his gaze. Calm as a still pool.

Kathka’s wayward thoughts ceased. Anger and fear wound seamlessly together until it was impossible to find the start of one and the end of the other or where he lay amidst it all.

The god knew. He knew all that went on inside of what remained of the man named Kathka.

“I will make you a deal.” His voice, rough from disuse, shattered the fragile space. As if the god expected a verbal response he paused. Even if Kathka could speak, he did not know what to say. Ages had passed, or what felt like ages, and these new words were as dangerous as the last the old man had uttered.

“If you save seven lives, I will give you a second life.”

The rage welled within Kathka. The Wise Man knew of the wrath that yearned for physical expression. He also knew the fear that Kathka’s fury could not smother.

Fear that the past would be repeated.

Kathka could not respond, but he accepted the deal. He barely understood the proposition, but he would accept the terms. He would save however many lives to find release from the endless torture he endured tethered to the immortal god. Then, with his new life, he would finish what he could not in his previous.

He would kill the Wise Man.

The old man knew his intentions. Nothing was hidden from him, the god of wisdom. But he sighed, nodded, and murmured, “Then Kathka, we have a deal.”

Find out more about Lydia MacClaren and her novel Seven Lives Saved by following the social media links below: