Kristina Streva grew up in Rockland County, New York. As a chronic daydreamer, she took up writing as a hobby and soon realized the magic in creating fantastical worlds. She loves museums, thrifting, movies, art, crafting, reading and all things creative.

The Inked! It has been a long-term goal of mine to become a published author. When the pandemic happened, the world slowed down and I decided to take the opportunity to finally accomplish that dream. My writing also allowed me to escape from the reality that was happening outside my window. I was able to build my own fantasy world, free from any pandemic. 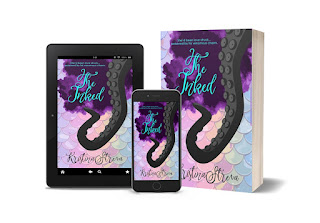 The Inked is fairly light-hearted, … except for that whole battle to the death thing in the middle of my novel. I have some mild horror in my book which I found fun to write, as I tend to gravitate to the dark. Some might find these moments to be difficult scenes as they are more graphic than others.

I like to do my writing at the Starbucks located inside my local Barnes & Noble. Being surrounded by other books and having a nice snack and some coffee really sets the mood. I find it motivating to be encompassed by such creativity.

I love the author Christina Henry! She writes a ton of dark twists on common fairy tales, and I truly enjoy reading all her books. I’m also a recovering Twilight addict. Those books were a staple of my college years. #teamedwardforlife

Q4: Which of the characters do you relate to the most and why?

Tanis is the youngest sister in my book, and I find her to be the most relatable. She’s a bit silly and naïve, but also tends to be the peacekeeper of the group. I’m a Libra, so I definitely appreciate a gal who wants to keep the peace.

What I love most about her character in my novel, is that she goes from being slightly co-dependent on her sisters to finding her strength and voice to help them. I think it’s a bit of a shock to her as well, that when facing a challenge, she can overcome it.

Consistency is key. Just keep writing, even if you think it's terrible and you want to stop. First drafts aren't meant to be perfect. It's a steppingstone. Fine-tuning can come later, but if you never start, you can never finish. 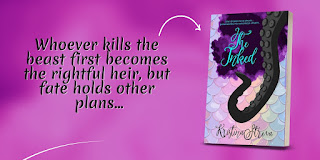 Since my book takes place in the ocean, I did have to look up some boating terms that I was unfamiliar with. I also used a thesaurus so I wouldn't be repeating the same words frequently. Additionally, I looked up videos of people expressing anger, sadness, and other emotions to see how I could better describe their facial expressions in my novel.

I don’t have a particular scene, but I will say when you have multiple characters in one chapter, head hopping can become a problem. I struggled with this during my writing and had to make sure that I was keeping each chapter in one perspective so as not to confuse the reader.

I am a pantser! I don’t plan or plot anything out with my writing.

My best friend is also a writer and we have joked about this. She has notebooks filled to the brim with characters, arrows, and anything you can imagine that would help you organize. I prefer to just write as I go… keep the juices flowing. Anything that needs to be changed can be altered in draft two!

Book two of The Inked series!

Shadow in the Glass by JJA Hardwood

Keep reading for an exerpt from The Inked and find out more about Kristina Streva by following the social media links below. 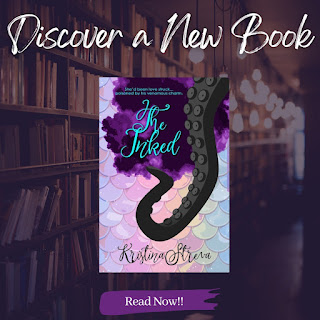 Her hair was beautiful, and much like that of the mermaids he had grown up with, it was long and flowed behind her in the water as she moved. Yuri’s eyes met his, and he held her gaze, staring at the stunning icy-blue that looked back at him. He traced her pale complexion from her face down to her skinny arms, now held bent and stiff against her hips.

“Do you not know who I am?” He wore a cocky smile that hollowed into dimples at his cheeks.

Yuri’s brows furrowed. Her sharp glare stabbed at his ego, causing his dimpled smirk to retreat from his face like a wounded soldier.

“Honestly, I don’t care who you are. Answer the question. Are your intentions to harm me?” Her eyes darted to his pronged trident.

Kaleb’s grip loosened on his weapon as he stooped toward the seabed, his eyes remaining focused on Yuri’s icy-blue scowl. He opened his palms, letting the trident roll out of his hands and onto the sandy seafloor. Inching back, he straightened his arms, outstretching

his hands high over his head.

of his empty hands.

Yuri crossed her arms over her puffed-out chest.

“That entirely depends on you,” she sneered. Her nostrils flared.

The once-retreated smirk returned to Kaleb’s face. How could such a small and petite girl have so much attitude? This girl is feisty! As his heavy trident sank deeper into the ocean floor, he lowered his hands and tapped awkwardly at his sides. His armour clung to his broad, muscular chest as he gestured in a proper bow. I might as well introduce myself properly.

“I’m Kaleb. My father is King Oasis of Atlantis. My troops and I came out here to hunt the beast that terrorizes these waters.”

Kaleb paused for a response that didn’t come. He waited. His stomach knotted at Yuri’s silence. It twisted like the ends of a fishing net. Her deep-blue eyes stared off to the rowboat in which she had emerged.

You can find out more about Kristina Streva by checking out the following social media links:

Like this interview? Please consider Buying Me a Coffee to keep them coming :)
Posted by Ash Oldfield at 8:30 AM